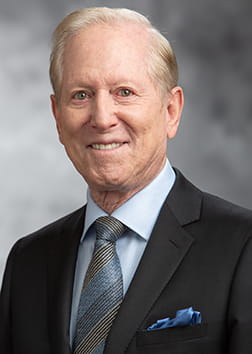 Larry Lazarus, a member of the Banner Health Board of Directors, is an attorney and president of the Arizona law firm Lazarus & Silvyn, PC, which specializes in land-use planning, zoning and development, environmental law, and land-use infrastructure financing. He was recognized as a “Legend of Law” in 2009, a “Best Lawyer” by U.S. News and World Report and “Best Lawyer in America” for ten years.

Among his many professional accomplishments, Lazarus was co-author of the City of Phoenix’s first General Plan, “The Urban Village Concept Plan”, which became a model for many urban areas throughout the United States.  He is a founding member of the Frank Lloyd Wright Society and has presented publicly and published numerous articles on land use and urban development.

Answering the call to serve, Lazarus is involved with numerous civic and community organizations, including past chairman of the Anti-Defamation League for the Arizona region and a recipient of the “Torch of Liberty Award” and past-chairman of Valley Forward, an Arizona environmental non-profit.  He is a board member with the Phoenix Community Alliance and a recipient of the “Center City Starr Award” and Greater Phoenix Leadership.

His past memberships include the Phoenix Chamber of Commerce, the American Planning Association, and the Urban Land Institute.

Lazarus was born and raised in the Chicago area, earned a bachelor’s degree in psychology and political science from the University of Iowa at Iowa City and a law degree from Drake University Law School in Des Moines, Iowa.