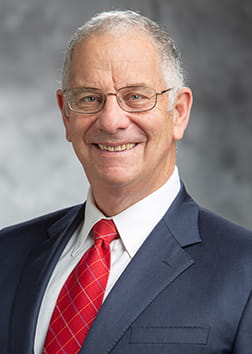 Peter Fine was appointed president and CEO of Phoenix, Arizona based Banner Health in November 2000. Banner Health is one of the nation’s largest secular, nonprofit healthcare organizations operating 33 hospitals and other services in six states. Banner employs more than 52,000 people, has more than $12.4 billion dollars in revenue and is Arizona’s largest private employer.

Prior to his appointment, he was executive vice president and COO of Milwaukee, Wisconsin based Aurora Health Care, a large integrated system serving all of eastern Wisconsin. His previous position with Aurora was president, West Allis Memorial Hospital. Before joining Aurora, Mr. Fine served in several hospital leadership positions, including president and chief executive officer of Grant Hospital and senior vice president of operations at Northwestern Memorial Hospital, both in Chicago, and assistant administrator of Porter Memorial Hospital in Valparaiso, Indiana.

Mr. Fine received his bachelor’s degree from Ohio University and his master’s degree in healthcare administration from George Washington University. He is a fellow in the American College of Healthcare Executives and previously served as a member of their Board of Governors. He is also a member of the American Hospital Association, Health Management Academy, Greater Phoenix Leadership, and serves on the board of directors for Premier, Inc., Greater Phoenix Leadership, Jeenie, and Banner Health; previously he also served on the boards of Accuray, Translational Genomics Research Institute, and the Heard Museum. In addition, he has served on the Arizona Commission on Medical Education and Research, the Citizen’s Task Force on the Maricopa County Health Care System, the Citizen’s Finance Review Commission for the state of Arizona, and Governor’s Transformation Advisory Committee.