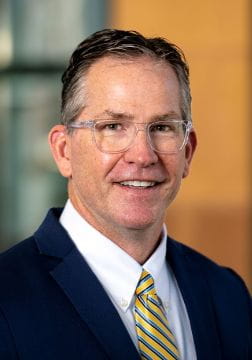 John Scherpf serves as the CEO of Banner Casa Grand Medical Center and previously served as the Chief Operating Officer (COO) for the Banner University Medical Center- Phoenix Campus (BUMCP). In this role, John managed the operations of Arizona’s largest acute care hospital located on a 66-acre academic medicine campus that generated a net revenue of over $1B in 2021. Prior to this position, John served as the COO at Banner University Medical Centers at the Tucson and South campuses. During his tenure, John led the $446M new tower expansion project on the Tucson campus, Banner Health’s largest expansion project at the time. Before becoming the COO, John served as the Associate Administrator for the campuses. He joined Banner Health in 2015 as the Director of Outpatient Services at Banner Baywood and Banner Heart hospitals in Mesa, Arizona.

After working for over a decade in the clinical setting in the Department of Veterans Affairs (VA), John transitioned to an administrative career in 2007. After completing an administrative fellowship, he was hired to be the Health System Specialist to the Chief Medical Officer at the Bay Pines VA Health Care System, one of the largest healthcare systems in the VA. His next impactful career move came in 2011, when he was promoted to the Associate Administrator role at the VA Health Care System in Phoenix, Arizona.

John has been a Fellow in the American College of Healthcare Executives since 2010 and continues to be a licensed Physical Therapist. John is married, has 2 daughters, and 3 rescue dogs. In his free time, he enjoys fitness activities, motorcycles, and home improvement projects.