How To Prevent Heat-Related Tragedies With A Teddy Bear

The tragedy of finding a child or baby after being left unattended in the dangerous heat of a sweltering car is a nightmare no parent wants to endure. We often ask parents, “How could you forget your child?” While this is reasonable, people ask these questions only after it’s too late.

Instead we should ask, “How can we prevent this tragedy from happening?”

Melissa Luxton, MSN, RN, injury prevention coordinator at Banner – University Medical Center Phoenix, shares tips on how we can reduce the likelihood of leaving a pet or child in the car:

“Leaving important items, like a purse or wallet, in the backseat is a little trick that will remind you to take a look in the backseat before going into the grocery store or parking your car in the garage,” says Luxton.

Another tip Luxton shares is to keep a teddy bear in the car seat when driving alone, then move it to the front seat when a child is in the car. This will serve as a visual reminder that there is a child with you. 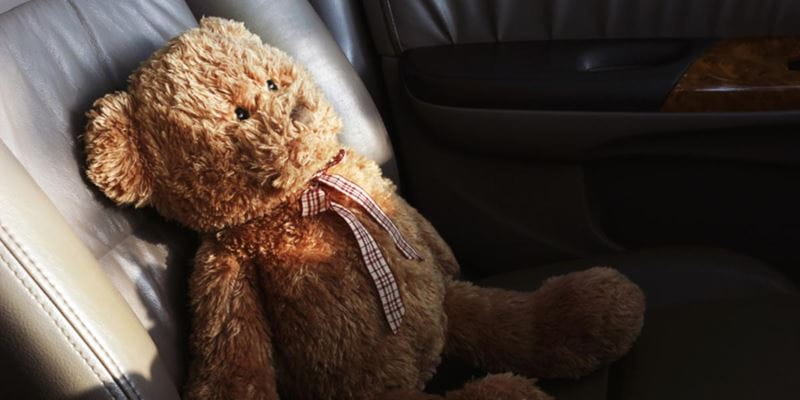 What temperature inside a car is too hot for kids?

It’s important to know it doesn’t take 115-degree weather for the inside of a car to become deadly. In Arizona, monsoon season drops the usual summer temperatures to 100 degrees or below. This can easily fool some into thinking it’s okay to leave a child in the car seat while running into the grocery store to buy a gallon of milk. Don’t make this mistake. When temperatures outside reach 100 degrees, the temperature inside a car can reach 138 degrees in as little as five minutes, and 150 degrees in 15 minutes. In fact, within just a few minutes, a 70-degree day can scorch the insides of a vehicle to 90 degrees—a temperature too hot for infants and children to safely handle.

Additionally, heat affects children differently than adults because, naturally, they are smaller. Dehydration sets in much quicker. When you leave a child in a hot car, they overheat, quickly run out of sweat and then fall unconscious—eventually resulting in death.

Tragedy can also strike when you have the car parked at home. Kids often climb into vehicles on their own to play or look for a toy and can become trapped.

“The first two places to look for a child is the pool and then the car,” says Luxton. “Even when a car is parked in a garage, remember to lock the doors and keep the keys away from children.”

If you see a baby or child left unattended in a vehicle do not hesitate to call 911.

This post has been updated. It was originally published on August 3, 2017.

YOU MAY ALSO LIKE
Listeria (Listeriosis): A Foodborne Bacteria That Could Make You Sick
Dermatologist-Recommended Skin Care Tips for Teens and Young Adults
More Young Children Are Accidentally Ingesting Marijuana. Here’s What to Know
Here’s How You Can Help Your Child Speak Without Stuttering
Your Daughter’s First Visit to the Gynecologist – What to Expect

11
Should You Be Worried About Your Infant’s Undescended Testicle?
Featured
Inspire Me
Dream Wedding at Banner Thunderbird Medical Center
Teach Me
What You Need to Know About Your Blood Oxygen Level
Advise Me
Can You Burn Fat and Gain Muscle at the Same Time?
RECENT
Better Me
Here’s What You Should Know About Bone-Weakening Osteoporosis
Advise Me
What Counts as Weight-Bearing Exercise to Strengthen Your Bones?
Advise Me
How to Support Recovery for a Newly Sober Loved One or Partner
Comments 0