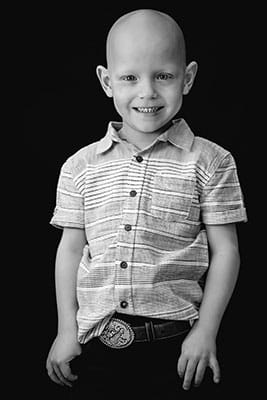 Meet 4-year-old Braxton Cluff. He and his twin brother, Briggs, are part rock stars, part adventurers and all fighters. And, in their short time on earth, they’ve sang a lot of songs, had some amazing adventures and put up quite the fight.

Lynsey and Colten Cluff had the twins prematurely at 29 weeks. The boys spent the first 3 months of their lives in the NICU at Banner Children’s at Cardon Children’s. When Braxton and Briggs made it home, life at the Cluffs’ began to settle into their new normal.

According to Braxton’s mom, Lynsey, he has always been just what you’d expect from a boy his age. He loves all things dirt and Ford, she explains. Braxton has also always loved music.

“Braxton and Briggs have been in music classes since they were very young,” Lynsey said. “They turn everything into a song.”

Braxton’s time in the NICU was only part of his journey, and he later faced another major challenge. It all started around Thanksgiving of 2017 when the whole family got sick.

While most of the family recovered quickly, Braxton seemed to keep battling something. He would have fevers and complain of his mouth hurting.

Doctors were pretty sure it was just a sinus infection.

In January of 2018, Braxton finally started to feel better. One Saturday night, Braxton, Briggs and their 2-year-old brother, Tate, were running around the house, behaving as 3 young boys would. Colten saw Braxton and thought he had something in his mouth, so he offered a father’s warning of no horseplay with food in the mouth. The strong-willed Braxton swore his mouth was empty.

Colten called him over and looked in his mouth. Braxton’s soft palate was so swollen it nearly touched his tongue. Colten knew something was wrong, so the family quickly made their way to the emergency room.

By the time they got there, the swelling in Braxton’s mouth had started to affect his throat. He was sedated and intubated. But, the family wouldn’t know what was wrong for three agonizing days.

“We are a very religious family, so there was a lot of praying and a lot of crying,” Lynsey said.

On January 16, doctors were able to tell Lynsey and Colten what the problem with their son was. The answer was earth-shattering: Braxton had Burkitt lymphoma, a form of non-Hodgkin’s lymphoma. It is a cancer that attacks the lymphatic system and is often recognized as one of the fastest growing tumors a person may face.

“We were at a high risk of losing him at the time, and the doctors were worried it would spread to his brain,” said Lynsey.

Braxton was in a fight for his life. He had lost 20 pounds, nearly half of his body weight, and treatment was very hard on him. He began to distrust the people caring for him and saw them as the people making him take nasty medicines or giving him shots. For someone his age, it was traumatic.

But, he made enough improvements to get off the critical list and was able to move to Cardon Children’s, which Lynsey and Colten welcomed since it was closer to home. Still, his first few days at Cardon Children’s were rough because he was so afraid.

Help was on the way

Olivia Houck is a board-certified music therapist at Cardon Children’s. She first met Braxton shortly after his arrival to the inpatient oncology unit and could tell he was very anxious and had a lot of stress.

She suggested Braxton spend some time away from his hospital room by visiting Sophie’s Place, the music therapy room at Cardon Children’s. She told Lynsey and Colten she thought Braxton could benefit from time away from his room in an environment where he could be himself for a while.

“At four years old, everything is new, and everything is different. I wanted to provide normalization through interactive play and exploration,” Houck said. “We had a hang out day, and I wanted to show Braxton and his family what was available to them in our hospital.”

Lynsey and Colten jumped into the therapy program because of the importance music has with their family.

What is music therapy?

Some people may picture sitting in a chair listening to music while receiving treatment, but music therapy is a lot more than that. According to Houck, music therapy in a pediatric setting is often about being interactive and letting patients touch and play instruments.

It is a clinical and evidence-based use of music to accomplish individualized goals, explained Houck. Those goals certainly do not always have to be musical.

In fact, music therapy can meet physical, emotional and psychological goals, according to Houck. It can help alleviate pain perception and increase socialization. It’s also a great motivator for people to get moving.

“You can't help but to dance or tap your feet,” Houck said. “Music has rhythm to it.”

Houck also explained that music therapy has been around a lot longer than most people realize. In the United States, it became more established as an organized, clinical practice in the 1940s. It has also helped some high-profile individuals when they needed it, including Gabby Giffords, who worked with a music therapist for her speech rehabilitation.

Music therapy is part of an interdisciplinary treatment program. When used alongside traditional treatments, music therapy focuses on in-the-moment goals totally based on the individual’s and the family’s needs.

“One of the biggest goals for Braxton was to give him choice and control because they don’t get that in the hospital,” Houck said. “Music therapy gives them that opportunity.” 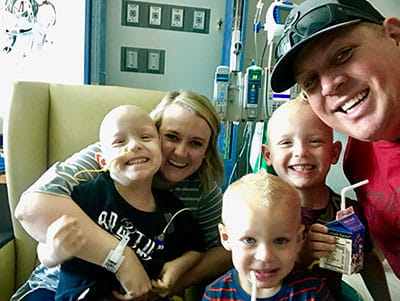 Colten described Braxton as having post-traumatic stress disorder. His once outgoing, effervescent little boy was so fragile and scared. Houck would change that.

“I had worked around music therapy,” Lynsey, a former pediatric physical therapist assistant, said. “I knew it could let him express his emotions, which he needed.”

The first time Houck met Braxton, she introduced him to Sophie’s Place, the music therapy room. Sophie’s Place at Cardon Children’s was the third such facility at a children’s hospital started by the Forever Young Foundation, the charitable organization started by hall-of-fame NFL quarterback Steve Young.

Opened in March of 2017, Sophie’s Place is a state-of-the-art facility and gives music therapists a place for group or private therapy sessions. Plus, a recording studio, listening station and practice room give patients plenty to explore.

And, it was just what Braxton needed.

Houck reminisced letting Braxton pick out an instrument for himself, one for her, and one for each of his parents to play. Then, they had an impromptu parade from Sophie’s Place on the third floor back up to his room on the seventh floor.

Not only was this good for Braxton, but it also helped the staff. It allowed them to see Braxton as a normal kid—not just a patient. And, it allowed the staff to do something with him other than treatment.

On August 24, 2018, Braxton—with Colten, Lynsey, Briggs and Tate by his side—celebrated his end of treatment with family, friends and staff. The ceremony marks the moment the patient has officially finished their cancer treatment, and part of the ceremony allows the patient to ring a gong.

Braxton, looking dapper and full of energy, held the mallet in his hand, looked at the crowd as his dad directed him over to the gong. Colten gave him some instruction.

“You get to hit that as hard as you want. One big swing,” Colten said. Braxton cocked back his arm, and as his dad counted to three and said, “hit it,” little Braxton unleashed a mighty swing.

Today, Braxton is back at preschool, enjoying life as a kid, again. While his treatment may be over, he still has follow-up visits with the doctors at Cardon Children’s. But, that’s not the only stop he makes.

“To this day, when we go back to this hospital, we can't leave without seeing Olivia,” Lynsey says.

For Houck, music therapy is a way to help the patient with self-esteem and to give them an activity to succeed with. It provides stability and gives them an interactive place to take care of their emotional needs.

Lynsey and Colten, however, see it as so much more.

"We owe his life to child life and music therapy," Colten said. “It gave him hope. Hope heals.”

YOU MAY ALSO LIKE
Here’s the Surprising Truth Behind These 13 Myths about Melanoma
Why You Should Never Ignore That Mouth Sore That Won’t Go Away
How to Eat Right When You’re in Treatment for Cancer
Tips for Making Your Colonoscopy Prep Smooth (and Bearable)
Expert Advice to Prevent Gagging During an Endoscopy
What is Thrombocytopenia (Low Platelet Count)?
Featured
Inspire Me
Dream Wedding at Banner Thunderbird Medical Center
Teach Me
What You Need to Know About Your Blood Oxygen Level
Advise Me
Can You Burn Fat and Gain Muscle at the Same Time?
RECENT
Better Me
Here’s What You Should Know About Bone-Weakening Osteoporosis
Advise Me
What Counts as Weight-Bearing Exercise to Strengthen Your Bones?
Advise Me
How to Support Recovery for a Newly Sober Loved One or Partner
Comments 0