Breann Benjamin vividly remembers the day last year when she was told her son had cancer.

Landon, the oldest of her three boys, had recently turned 7 and had been complaining about back and leg pain. Then, random bruises started appearing on his body, which was not super alarming at first for an active, red-headed boy who loves soccer and football. He was also feeling really tired a lot of the time—not what you would expect from a 7-year-old. As the symptoms progressed and more bruises appeared, Breann scheduled an appointment with Landon’s pediatrician.

It was September 11, 2017. Breann took Landon to his morning appointment and, before she knew it, was told to take him across the street for blood work. As a mother, Breann felt it in her heart. Something was very wrong.

A few hours later, Breann received a call from Landon’s pediatrician telling her she needed to take Landon to the emergency room right away. Breann’s family met her and Landon at the hospital and then they waited together. They continued to wait for what felt like an eternity until, finally, a doctor came to speak with them. It was then the family heard their biggest fear spoken aloud.

The next day, the diagnosis was confirmed. Landon, a fun, sports-enthused, 7-year-old kid, had cancer, specifically acute lymphoblastic leukemia (ALL).

According to MD Anderson Cancer Center, each year about 3,500 children are diagnosed with leukemia in the United States. Leukemia is a cancer that begins in the bone marrow, where new blood cells are formed.

Although ALL is an aggressive form of cancer, it has a five-year survival rate of about 90%, making it the most treatable type of childhood leukemia.

Everything was happening so fast. Looking back on it, Breann explained,

We were lucky. Landon was officially diagnosed the day after we took him in for his first appointment. I know some families wait months before they have an exact diagnosis.

That being said, the family was forced to spring into action, and Breann instantly began thinking about where to go to get her son the best possible care.

She began assessing hospitals near and far that she felt would give Landon a fighting chance. She remembers Landon’s doctor coming to her and letting her know they were more than welcome to take Landon to whichever hospital they felt would suit their needs best, but he also reassured her family they could treat Landon using the same protocols locally.

Just two days after being admitted to the hospital, Landon began his course of treatment locally at Banner Children’s at Cardon Children’s Medical Center in Mesa, Arizona.

Life became a rollercoaster ride for both Landon and his family as they were forced to adjust to a new way of life. Landon’s care team put him on a 3-and-a-half-year treatment protocol, which included chemotherapy. Because cancer and its treatment can take a huge toll on a person’s body and can weaken the immune system, he had to be pulled from school. Doing normal, everyday things was no longer an option. 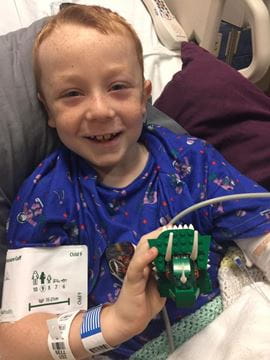 Watching your child go through treatment is not easy, but it helps to have a strong support system and a team you trust helping your family through the process. Breann explained she has had a phenomenal experience with doctors, medical social workers and child life specialists at Cardon Children’s Medical Center. She said,

They have helped me, Landon and the rest of my family so much. I’ve had social workers sit with me and just let me cry. I absolutely love everyone there.

Prior to learning their son had cancer, Breann and her husband, Nate, had been talking about finding a charity they could work with to give back. They were looking for something they could do together to teach their growing family about the importance of helping others. Though you may think Landon’s diagnosis would have put those plans on hold, it was the opposite. Shortly after the diagnosis, Landon’s family was inspired to start their own nonprofit.

Right from the start, there were doctors and nutritionists who met with Landon’s family to explain the things they should look out for and do to keep Landon safe. Breann recalled,

The thing that stuck with me the most was that Landon’s immune system was compromised and we had to make sure he would be coming home to a sanitary environment.

When thinking back on something that would have been helpful for themselves following the diagnosis, the family came up with an idea. They decided to start their first program, Loads of Love, to help provide laundry baskets filled with cleaning supplies to families of children diagnosed with life-threatening illnesses. Each basket is filled with essentials such as a towel, bleach, disinfectant wipes, hand sanitizer, gloves and a face mask. 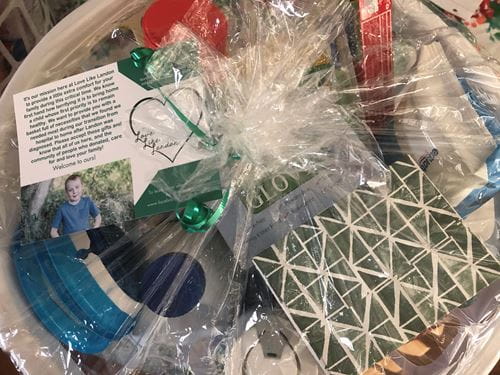 Landon’s family’s nonprofit is called Love Like Landon, and it recently became 501(c) certified. Aside from donating baskets of supplies, Love Like Landon has also partnered with local cleaning companies to provide families of pediatric patients with a deep clean of their homes so they are safe and ready for their child’s return from the hospital. In terms of future projects, the nonprofit is working toward funding childhood cancer research as well as providing “chemo buddies” to kids going through treatment. The idea for “chemo buddies” is that a volunteer would come entertain and play with children going through chemotherapy to give kids something to look forward to on their treatment days and give parents a much-needed break.

As you can imagine, supporting a child going through cancer treatment can be a full-time job, so Breann is thankful to have the full support of her parents and sisters when it comes to the day-to-day operations of Love Like Landon. Breann and her family have vowed to never take a penny from their nonprofit for themselves and to keep reinvesting all donations into giving back. Breann says she has been amazed by how much she has been taught by her son’s doctors and child life specialists and credits them to being able to now educate and help others.

Where is Landon Now?

Today, Landon is 8 years old and is about a year into his 3-and-a-half-year treatment protocol. While there have been a few bumps along the way, he has been responding well to treatment and is currently in remission. Landon recently started third grade in August--quite the milestone after having to miss almost all his second-grade year due to treatment. He has two younger brothers, 2-year-old Asher and 1-year-old Dallas, and is very excited to welcome his first little sister this December.

Although Landon is not able to get back onto the soccer or football field yet, he has become quite the video game aficionado. Landon’s parents are not completely thrilled about his newfound love for video games, but they do like that it allows him to take his mind off things and just be a kid again.

Landon and his family are very optimistic about the future and look forward to continuing to help other families through Love Like Landon.

For more information on Love Like Landon, visit: https://www.facebook.com/lovelikelandon

YOU MAY ALSO LIKE
What Does My Baby’s Apgar Score Mean?
5 Tips to Help Encourage Your Baby to Crawl
10 Tips for Potty Training Your Toddler
Signs Your College Student Is Struggling with Mental Health Issues
7 Ways to Help Keep Your Family Healthy This Winter
What to Know About Respiratory Syncytial Virus (RSV)
Featured
Better Me
Why Is My Nose Burning?
Inspire Me
Three Women, Three Final Treatments, Three Survivors
Teach Me
Why Your Heart Rate Goes Up When You’re Sick
RECENT
Teach Me
A to Z of Hysterectomies, From Planning to Recovery
Advise Me
How to Prepare Yourself and Your Household Before Sickness Strikes
Better Me
5 Things to Know About Taking Blood Thinners
Comments 0