Beyond ABC: A Father’s Journey Of Life And Learning With His Autistic Son

Disneyland is supposed to be the happiest place on earth. So, imagine my excitement at the thought of a fun-filled trip with my then six-year-old son, as we entered the gates to hang out with Mickey, Minnie and friends.

Instead, within two minutes, we turned right around and left. Aaron couldn’t bear the noise, the crowd, the very craziness most other kids delight in.

Movies, restaurants, church, playgrounds and parties – you name it - we’ve walked out of each of those places.

All because my son, who has autism, can’t bear a place that’s too crowded or too loud. He closes his ears with his fingers or flaps them in annoyance. He yells. He cries. He becomes irritable.

Trust me, as a father of three boys now, two of whom are not autistic, if you think taking your child to a restaurant is hard, you’ve probably got nothing on one with autism (at least on the bad days). 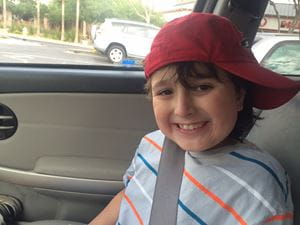 It was sometime between his second and third birthday. Aaron just stopped talking or making sounds. He developed repetitive behavior. I was in med school at the time and knew something was wrong.

After testing and multiple evaluations, my son was diagnosed with autism. A recent report by the Centers for Disease Control and Prevention shows one in 68 kids have an autism spectrum disorder (ASD), ranging anywhere from high functioning to severe cases. This is a 123 percent jump in the prevalence of ASD since 2002. More than 500,000 are expected to reach adulthood in the next 10 years.

It’s being called the “autism tsunami,” and boys are four times more likely than girls to be diagnosed with ASD.

The statistics translate to a large number of kids entering the education system with special needs. Just like my son, who is in a specialized classroom at a local school.

There has never been a greater need for schools and teachers who can handle all these children. As Chief Medical Officer of Banner Behavioral Health and as a father to a special needs child, I couldn’t be happier to see Banner Children’s Academy, specially tailored for students with autism, Asperger’s syndrome and other special needs, move to a bigger facility in Tempe, Ariz. this week, at the start of the new school season.

Often, these children are ostracized and picked on at school, and they do poorly. Having a school such as Banner Children’s Academy in the community represents a chance for them to have a regular school experience in an understanding setting. We will be able to serve more kids at the new campus. We are also developing a vocational program and are partnering with community organizations to get them to build academic and technical job skills for our students - many of whom are detail-oriented and great at the arts or computers.

Aaron, now 10, appears to be musically gifted. After hearing the intro to “I am the Walrus” by the Beatles, he learned to play it on his own on the keyboard. He may be delayed in some areas, but is flourishing in others. Such is the life of a child with autism.

Banner Children's Academy will also have a larger science lab and allow more community partnerships to bring in specialists for the arts, music and other vocations are all in the works. The new space will give us the ability to do that. The smaller teacher-student ratio, helps them learn and grow to their highest potential at their pace.

When Aaron has uncontrollable outbursts and is almost impossible to console, it feels like my 10-year-old has disappeared into an autism abyss. I constantly worry about his future. Who’s going to look after him when I’m gone? Lack of social skills is an unfortunate hallmark of many autistic children. It’s hard for them to make friends.

But with special attention, with the help of dedicated teachers, speech and occupational therapists and behavioral health experts, he and many children like him can and do make good progress.

Aaron may not enjoy the usual pleasures of childhood as other kids, but make no mistake, he likes to have fun. Two of his favorite things are to eat and play at Peter Piper Pizza and to ride elevators. Aaron can tell you the make and model and where each elevator is located throughout the Valley. Of course, if you are riding in the elevator with him, you may not enjoy it as much, as he likes to stop on every floor.

His birthday present this year: A stay at a hotel in downtown Phoenix.

We’ll ride the elevators up and down, we’ll order pizza in the room and it’s going to be great!

Daniel Pacheco, MD, is the Chief Medical Officer at Banner Behavioral Health Hospital in Scottsdale, Ariz. In his spare time he enjoys spending time with his family, reading and exercising. He hopes to continue to expand behavioral health services to better serve our community.