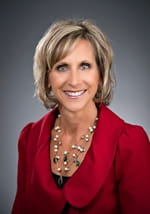 Previously, Robertson was CEO of Banner Baywood Medical Center and Banner Heart Hospital, both located on the same medical campus.

Robertson began her health care career as a nurse at Banner – University Medical Center Phoenix in 1988. A cardiac nurse with nearly 2 decades of experience, she has served in various staff and management positions through the years.