Are Vegetable and Bean Pastas Healthier? We Boil Them Down 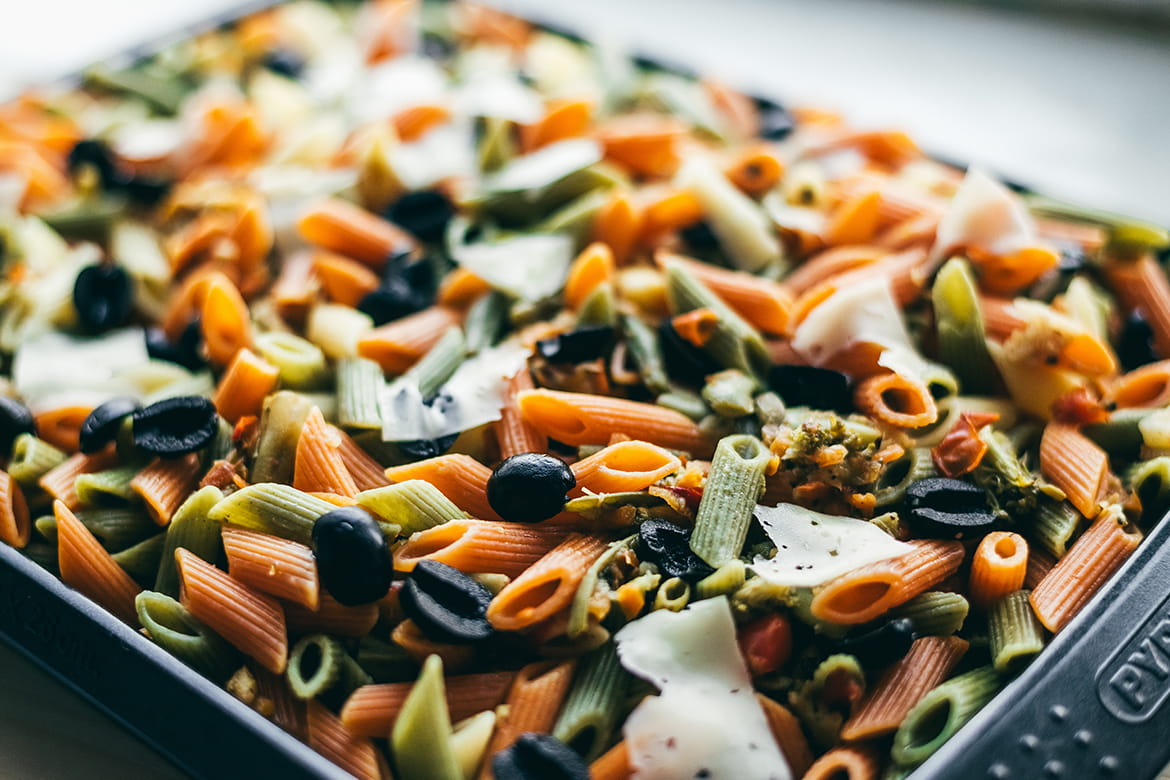 Pasta comes in all shapes and sizes—and now, lots of alternatives. Move over white and whole-grain pastas, and say hello to brown rice pastas, vegetable pastas like zucchini and butternut squash and bean pastas like chickpea and edamame.

While technically these alternative pastas aren’t “new” per se, you’re probably noticing a lot of alternatives on store shelves these days. This is especially great news for those who have gluten intolerances or who are looking to reduce their carb intake or get more protein.

If you can’t part with your grandma’s homemade fettuccine noodles but want to spice things up, pasta substitutes may be worth a shot. To boil them down, we spoke with Gina Thayer, RD, a registered dietitian with Banner Fort Collins Medical Center.

Whether ribboned, shredded, scraped or julienned, freshly made vegetable-based pasta is an excellent way to boost your veggie intake and reduce carbs.

“If you’re aiming for fewer carbohydrates and calories, try veggie pastas,” Thayer said. “They’ll have slightly fewer or similar amounts of fiber and much less protein than traditional pasta, but they’re a great alternative for anyone – especially for those with gluten sensitivities, wheat allergies or celiac disease.”

Compared to traditional pasta, bean/legume-based pastas contain a greater amount of protein and fiber and - bonus: They’re also gluten-free! Just make sure you watch your portions.

“Bean pastas, like chickpea and edamame, tend to be higher in calories and carbs than traditional pastas,” Thayer said. “But if you’re trying to get more protein without adding animal products, these are good alternatives.”

Brown rice is a whole grain that is naturally gluten-free and is a good source of protein and magnesium. Just be mindful of other ingredients. Sometimes white (refined) rice or other refined grains are included as well. Brown rice pasta also packs a significant calorie punch, so really watch portion sizes.

Also nicknamed the “miracle noodles,” shirataki pasta contains hardly any fat, carbs or calories but has zero protein, so you’ll want to have other nourishing foods at the meal to adequately supply your body with energy.

A nutritional guide for pasta and some pasta substitutes: 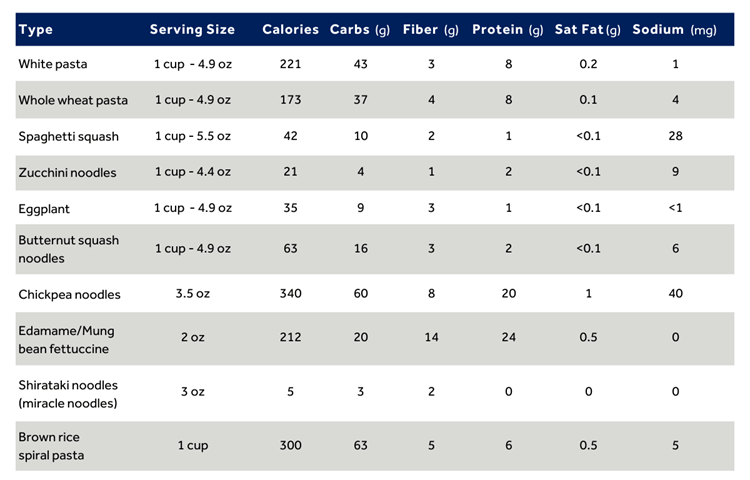 What if you’re craving traditional pasta?

Vegetable, bean and rice pastas are great alternatives, but sometimes you just want the “real deal.” And that’s okay! Traditional pasta isn’t “bad” for you, it’s all about portion size, Thayer said.

“Did you know that one serving of pasta (1/3 cup cooked) has about 70 calories, 15 grams carbohydrates and 2-3 grams protein?” Thayer asked. “So, if you are truly craving a good old-fashioned bowl of spaghetti and meatballs, and no veggie pasta sounds appealing, go for the original—just keep your serving size in check.”

Bottom line: Listen to what your body craves but in moderation. And don’t be afraid to try new things. “If there’s a pasta substitute that sounds interesting to you, give it a shot,” Thayer said.

For other food-related reads, check out:

YOU MAY ALSO LIKE
Is MSG Bad for You? You May Be Surprised
Blue Zones Diet: The Pros, Cons and What to Eat
5 Important Reasons to Try Dry January
Could You Have a Vitamin B12 Deficiency?
How to Figure How Many Calories You Really Need to Meet Your Goals
How Family-Based Therapy Can Help Treat Eating Disorders
Featured
Advise Me
How Often Should You Wash Your Sheets to Keep Germs Away?
Inspire Me
Three Women, Three Final Treatments, Three Survivors
Teach Me
5 Tips to Remove Water From Your Ears
RECENT
Teach Me
What is Tianeptine (AKA Gas Station Heroin)?
Better Me
How to Get Rid of Those Painful Cracks in the Corners of Your Mouth
Teach Me
Why Do I Keep Getting Strep Throat?
Comments 0