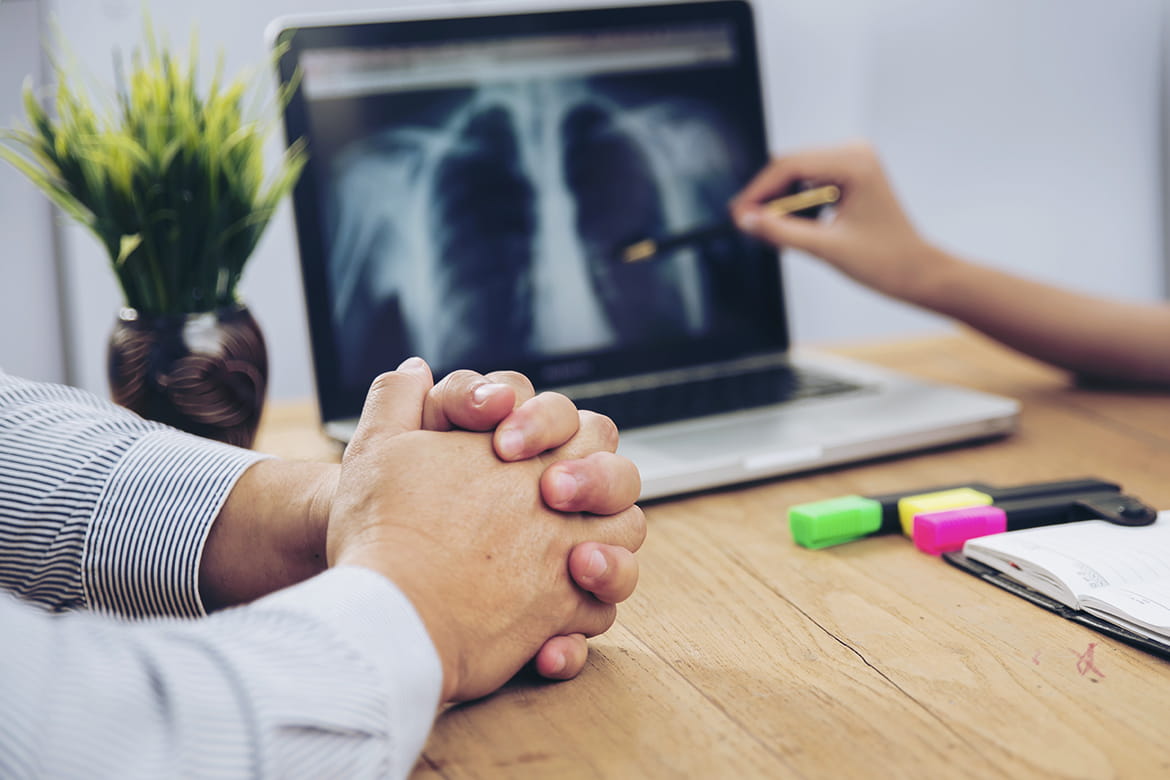 Lung cancer treatments have progressed and improved over the past years, but as with any type of cancer, early detection is still key to receiving the best prognosis. Though it is the second-most common cancer for adults in the United States, lung cancer can often be difficult to diagnose when it’s in the early stages. That’s why those at high-risk for the disease—people with a history of moderate to heavy smoking—should start getting screened early and regularly.

Non-small-cell lung cancer is the most common type of lung cancer. “If you’re an otherwise well person, the standard treatment for early stage NSCLC is surgery to remove the portion of your lung containing the cancer,” says Dr. Gaspar.

Elbert Kuo, MD, a thoracic surgeon with Banner MD Anderson Cancer Center, explained lung cancer surgery this way: “If you imagine your lungs are like a big tree, radiation is like pruning the diseased leaves off the tree. This saves a lot of leaves and lung tissue. In surgery, we cut the branch at the base; this removes all the cancer and takes out any lymph nodes and lung tissue where the lung cancer could spread.”

“Using small incisions and a camera, we can remove the lung tissue with the cancer and lymph nodes that drain into the area. With improved pain management techniques, you may only stay in the hospital for three days and be walking and eating the night of your operation.”

If you have early stage NSCLC but are in poor general health or have difficulty breathing or shortness of breath, you may not able to undergo surgery, but you can receive a special form of radiation therapy called stereotactic body radiation therapy (SBRT). This form of radiation is painless and is usually done in three or five treatments over 1-2 weeks. SBRT has shown to be successful in preventing recurrence of lung cancer in the majority of cases, says to Dr. Gaspar.

If your non-small-cell lung cancer has spread from your lungs to the adjacent lymph nodes in the middle of your chest but has not spread outside of the chest, the usual treatment is the combination of radiation therapy with chemotherapy, followed by immunotherapy.

“The most significant advancements have occurred in patients with advanced stage cancer that has spread to other organs,” said Jiaxin Niu, MD, director of Banner MD Anderson’s Lung Cancer Program. “More sophisticated testing on tumor samples or your blood is performed to look for specific gene mutations or immunotherapy markers.”

Markers are measurable things in your body that can indicate illness.

Dr. Niu noted another exciting development: immunotherapy. “By removing the cloak of lung cancer, immunotherapy called checkpoint inhibitors has been shown to be the real game changer in many patients, and some patients even go to complete remission,” Dr. Niu said.

You’ve been diagnosed with lung cancer and are aware of the different treatment options, but how do you know what’s best for your individual case? Dr. Gaspar and Dr. Kuo recommend you consult with a multidisciplinary team consisting of a medical oncologist, radiation oncologist, interventional pulmonologist and thoracic surgeon.

“The most appropriate type of treatment is sometimes not known until you have seen several types of specialists,” said Dr. Gaspar.

“The providers will go over your individual situation and together, with you, come up with a customized treatment plan,” said Dr. Kuo. “Each patient is unique, and the treatment plan needs to be tailored to that patient.”

YOU MAY ALSO LIKE
How to Use Supplements During Cancer Treatment
Recovering Your Sex Life After Breast Cancer
What Are My Alternatives to Colonoscopy to Screen for Colon Cancer?
40 Regalos útiles para quienes están recibiendo tratamiento para el cáncer
Derribando 7 mitos sobre el cáncer de pulmón
What Does It Mean to Have Dense Breasts?
Destacados
Aconséjame
How Often Should You Wash Your Sheets to Keep Germs Away?
Inspírame
Three Women, Three Final Treatments, Three Survivors
Enséñame
5 Tips to Remove Water From Your Ears
RECIENTE
Aconséjame
How to Grieve Someone Who Was a Negative Part of Your Life
Aconséjame
Does Your Child Need Medical Care or Can You Treat Them at Home?
Enséñame
What Are Braxton Hicks Contractions?
Comments 0