Psoriasis and Five Similar-Looking Conditions You May Confuse With It 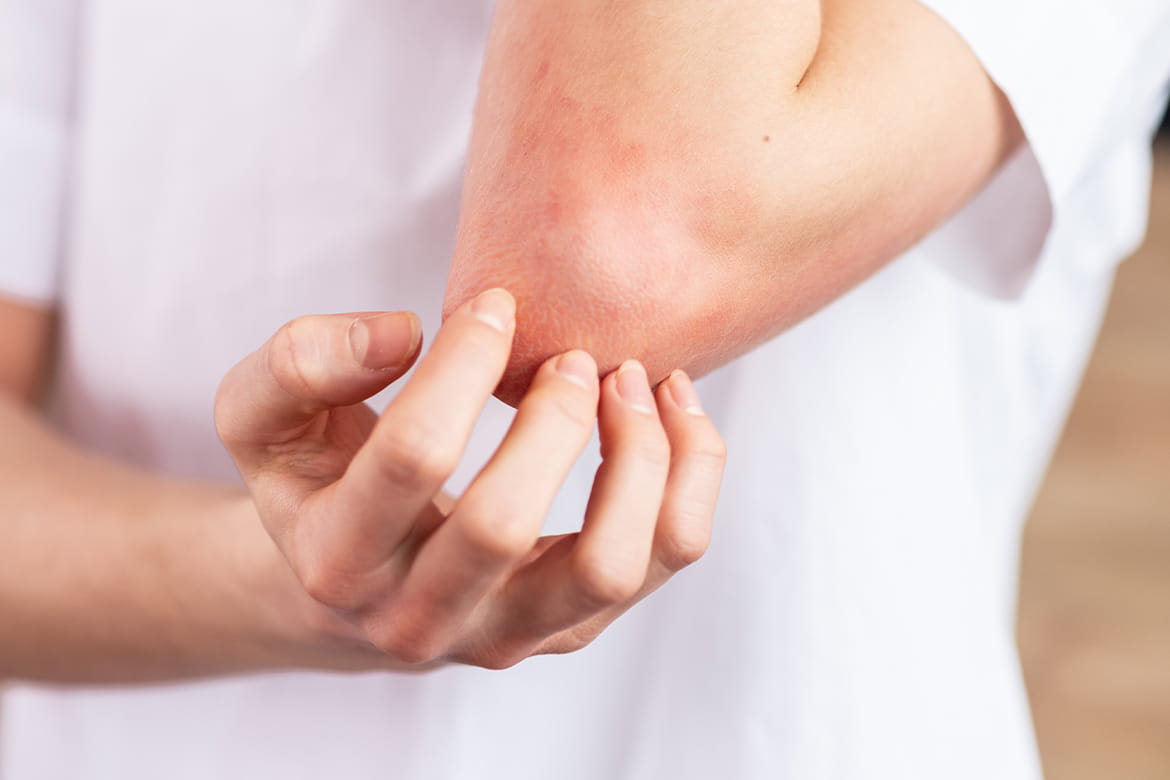 A patchy, scaly rash can be unsettling, especially if you don’t know what caused it. There are several skin diseases and reasons one may pop up on your skin. Maybe you brushed up against some poison ivy on that hike the other day or maybe it’s related to one of the more common skin conditions dermatologists see called psoriasis.

Because psoriasis can look like many other skin diseases that cause scaly patches and itchy rashes with inflammation, many people don’t know what it is or even what it looks like.

Do you know how to spot psoriasis?

Read on to learn more about psoriasis, common types of psoriasis and five other potential causes of your rash.

Psoriasis is an autoimmune disease, or problem in the immune system, that causes skin cells to grow faster than usual.

“If you have psoriasis, your body thinks its own skin tissues are foreign invaders that need to be attacked,” Anthony Santos, MD, a dermatologist at Banner Health Center in Sun City West, AZ. “Your immune system then signals your skin to speed up the production of skin cells, which causes scaly patches, known as plaque, on your skin’s surface.”

Genetics play a major role in the likelihood of developing this disease, however, environmental factors such as medication, stress or infection may play a role as well.

The good news? “Psoriasis is not contagious and is typically treatable,” Dr. Santos said. “While the disease may not go away completely, there are a number of therapies available today, from topical creams and light therapy to at-home treatments, that can help slow cell growth and smooth out the skin.”

[For at-home self-care tips, read “How to Create a Self-Care and Skincare Routine for Psoriasis.”]

Psoriasis plaques can consist of a few spots of dandruff-like scales or full-blown eruptions that cover large areas of the body. It is usually found on your elbows, knees and scalp, but it can also appear on your legs, trunk and nails.

Since some of the names alone don’t do any favors in better understanding them, let’s break them down.

This chronic skin condition affects about 80 to 90% of those with psoriasis. It usually starts as little red bumps and develops into red patches with a thick silver-grey coating (plaque) on top. You’ll typically notice on the bends of your elbow and knees and the lower back.

Guttate psoriasis appears as a large rash with small, round red spots on the skin, typically around your trunk, arms and legs, and usually follows a bacterial or viral infection, such as strep throat.

Not to be confused with seborrheic dermatitis (AKA dandruff), scalp psoriasis involves red, scaly skin on your hairline and can creep down your forehead and the back of your neck and ears.

This form of psoriasis appears on fingernails and toenails. Common signs to watch out for are white, yellow or brown discoloration, a buildup or separation of the nail from your finger or toe and crumbling nails.

Inverse psoriasis appears as dry, red scaly patches in the folds of the skin, such as breasts and groin areas and armpits. Sweating can make this form of psoriasis worse.

This form of psoriasis can occur with other forms of psoriasis and can break out in single areas or cover your entire body.

“There are several types of pustular psoriasis, such as acrodermatitis continua of Hallopeau, but, in general, this condition causes pus-filled blisters to form on the skin,” Dr. Santos said. “Eventually, these blisters turn brown and crusty and peel off.”

Erythrodermic psoriasis is the most aggressive form of psoriasis that causes widespread peeling, burning, fever and inflammation. It messes with your normal body temperature and fluid balance and may lead to shivering and swelling in the feet or ankles.

Other similar-looking conditions to consider

If you believe you have any of the above symptoms of psoriasis, it’s best not to make guesses. Schedule a visit with your health care provider or a dermatologist who can properly diagnose and treat the condition.

However, if your symptoms don’t resemble any of these, here are some other diseases that are often confused with psoriasis.

Clinically known as atopic dermatitis, eczema is more prevalent than psoriasis and often appears on the backs of knees and elbows.

“The biggest difference between eczema and psoriasis is how eczema is triggered,” Dr. Santos said. “Eczema can be brought on by outside irritants, such as dust and food. In comparison, irritants generally will not trigger psoriasis.”

Lupus and psoriasis are both autoimmune diseases that can have flare-ups, but lupus is far less common and more severe as it can affect your internal organs. In addition, rashes from lupus aren’t typically itchy like they are for people with psoriasis.

Rosacea is also a chronic inflammatory condition that can cause patches of inflamed, itchy skin, but the biggest difference is where rashes occur.

“Rosacea is more common on the cheeks,” Dr. Santos said. “Another distinguishable difference between rosacea and psoriasis is that it is not uncommon to see blood vessels beneath the skin with rosacea.”

Shingles is caused by the same virus that brings on chickenpox, but it shares some symptoms with psoriasis. Like psoriasis, shingles can produce a red, blistering skin rash that may burn and itch. However, the biggest difference is that shingles is contagious for those who’ve never had chickenpox. While both conditions can affect large areas of the body, shingles often occurs on the torso, usually affecting one side of the body.

Ringworm shares similar symptoms with psoriasis, but its origin is different.

“Ringworm is a fungal infection, so you can acquire it in a number of ways — from dirt, pets and even contact with other people,” Dr. Santos said.

With the untrained eye, it can be hard to determine what skin condition you have. However, the diagnosis for psoriasis is straight forward and your health care provider or dermatologist can most appropriately diagnosis and treat your psoriasis by taking your medical history and examining your skin, scalp and nails. Rarely, will they require a small skin biopsy to diagnose psoriasis.

YOU MAY ALSO LIKE
6 Exercise Tips to Keep You Moving in Cold Weather
How to Get Rid of Those Painful Cracks in the Corners of Your Mouth
These Tips Can Help You Get Used to Your Hearing Aid
6 Conditions That Affect Men More Than Women
Scoop on Poop: 5 Things to Know About Your Poop
These Core Exercises for Seniors Can Help Prevent Injuries
Featured
Advise Me
How Often Should You Wash Your Sheets to Keep Germs Away?
Better Me
Why Is My Nose Burning?
Inspire Me
Three Women, Three Final Treatments, Three Survivors
RECENT
Better Me
Wiggles? Growing Pains? Your Child May Have Restless Leg Syndrome
Advise Me
Why the Type of Protein You Eat Makes a Difference in Your Health
Advise Me
How to Manage Your Own Risk When There’s Cancer in Your Family
Comments 1