An EpiPen Could Save Someone’s Life: Here’s When and How to Use One 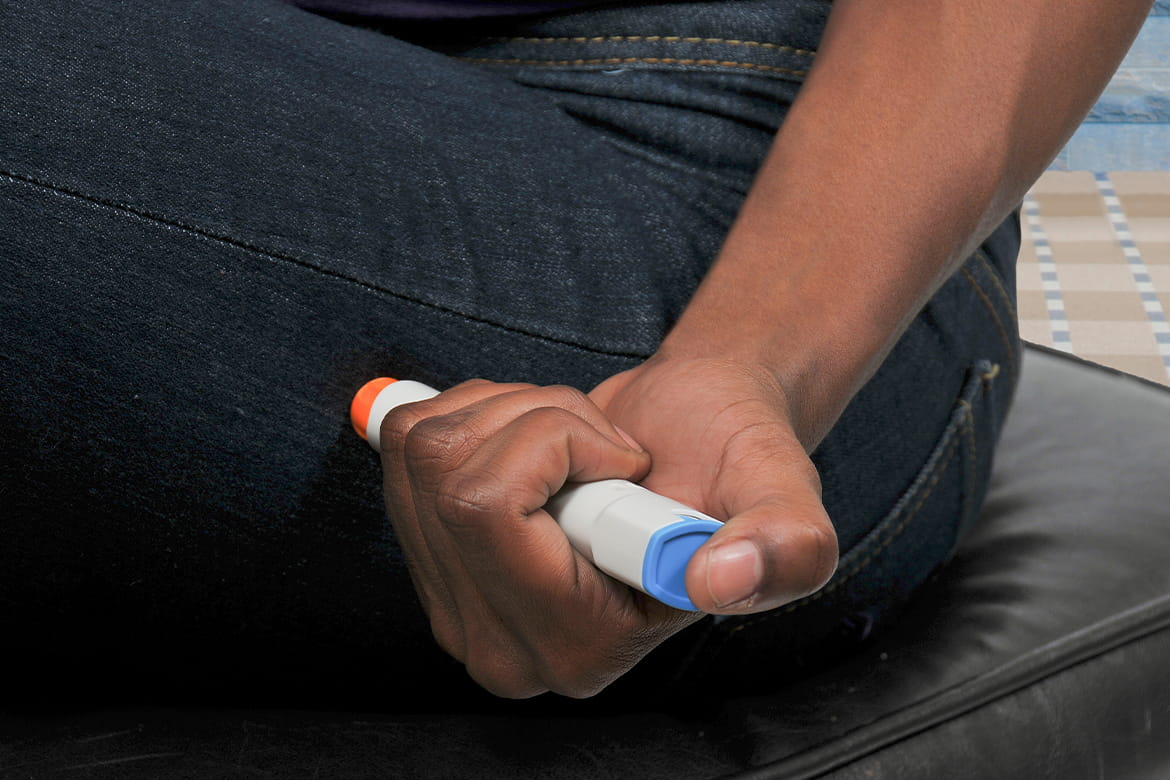 A lot of times, allergic reactions are mild and only affect one part of your body. You might get a rash, a runny nose or itchy eyes, for example. But for people with certain allergies, contact with the substance they are allergic to could trigger a dangerous, even life-threatening, reaction.

According to the American College of Allergy, Asthma, and Immunology, these people may be at risk for a condition called anaphylaxis if they are exposed to:

Anaphylaxis occurs when your immune system overreacts to an allergen. “In an allergic reaction, blood vessels relax and leak fluid. This causes redness and swelling in the skin or nose, mucus production in the nose and lungs, an upset stomach, swelling, and a drop in blood pressure,” said Tara Carr, MD, an allergy and immunology specialist at Banner Health in Tucson, AZ.

These symptoms may not sound serious, but they can become dangerous. That’s because swelling in the airway can block airflow, and low blood pressure can mean organs don’t get enough oxygen.

So, people diagnosed with these allergies often carry an epinephrine autoinjector or have one nearby, since epinephrine can reverse the symptoms of this allergic reaction. “It helps your blood vessels contract normally and supports your blood pressure and your heart,” Dr. Carr said.

“I encourage my patients who are at risk for this type of allergic reaction to carry an epinephrine autoinjector at all times in case they are accidentally exposed,” Dr. Carr said. “People with food allergies or bee sting allergies are always at risk of exposure.”

If you’re concerned about the cost of an autoinjector, talk to your doctor. Depending on the brand of injector and your medical insurance, they can be expensive. But there are ways to get
free autoinjectors through the manufacturers.

When should you use an epinephrine autoinjector?

Dr. Carr says if you have symptoms of an allergic reaction, you should use the epinephrine autoinjector. Symptoms can include:

Some doctors recommend taking an allergy antihistamine pill, rather than using an autoinjector, if you only have symptoms on the outside of your body, such as a rash or hives. You can talk to your doctor about what’s right for you. If you’re not sure, use the epinephrine autoinjector. “There is no wrong reason to use epinephrine. It is lifesaving and works best when it is used earlier during an allergic reaction,” Dr. Carr said.

How do you use an epinephrine autoinjector?

You can administer epinephrine to yourself or to someone else. “It’s easy and doesn’t require any medical training,” Dr. Carr said. “Each device is slightly different, but the general process is the same.” The injector will be prefilled with the right amount of medication for the person it’s prescribed to base on weight.  Here’s what to do:

One dose is usually enough, but autoinjectors typically come in packs of two, and you can use a second dose if symptoms aren’t getting better within five to 15 minutes.

Dr. Carr said, “It is surprisingly not that uncomfortable. Some patients feel a head rush, and others feel a slight increase in heart rate or jitteriness. Most people feel better because their allergic reaction is subsiding.”

What should you do afterward?

You should call 911 or have someone take you to the emergency department after administering epinephrine, since you had a potentially life-threatening allergic reaction that might need additional treatment. There’s also a risk of another reaction.

Find the Banner Health emergency department closest to you.

Epinephrine autoinjectors can reverse dangerous allergic reactions and save lives. If you or your child needs an autoinjector, be sure to have it close by and know how to use it.

Schedule an appointment with an allergy and immunology specialist.