Vaccinations and Friends Who Doubt Them 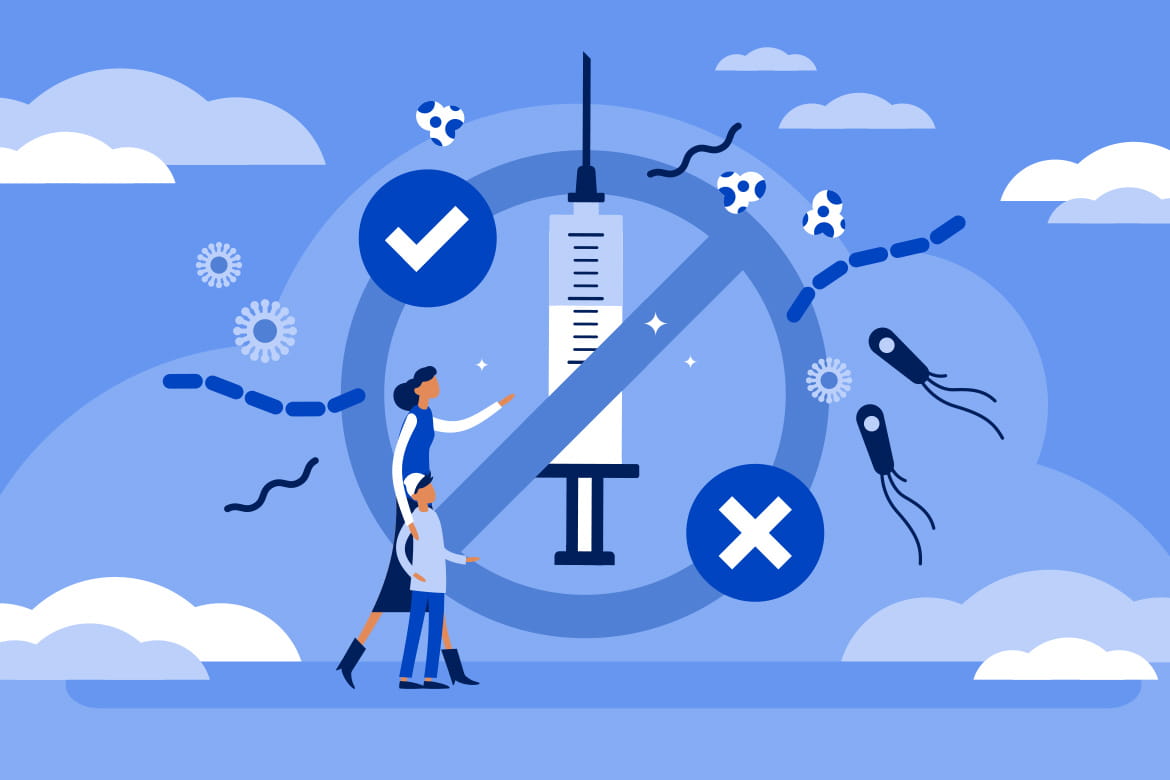 “A man with a conviction is a hard man to change. Tell him you disagree, and he turns away. Show him facts or figures, and he questions your sources. Appeal to logic, and he fails to see your point.”

Parenting can be hard, especially with so many differing opinions on everything from breastfeeding to what age it's safe for your child to play football, if at all. When commiserating with friends and sharing advice, the topic of vaccinations can be an especially sensitive one—and often avoided.

Let’s face it, some people have a complicated relationship with science. From debates over global warming and evolution to whether the moon landing was real or not—some still fail to trust facts, figures and scientific research.

“This may be due, in part, to a phenomenon called cultural cognition,” said Jerimya Fox, a licensed professional counselor and a doctor of behavioral health at Banner Behavioral Health Hospital. “This occurs when we perceive risks and related facts in relation to our personal experiences and group commitments rather than stand-alone facts. We see this most often referred to in the political realm when describing our political affiliations as Republican or Democrat.”

The World Health Organization (WHO), Centers for Disease Control and Prevention (CDC) and the majority of the world’s health care community agree that immunizations are safe, effective and essential for public health—greatly reducing disease, disability and death.

The first vaccine discovered was the smallpox vaccine. Before the vaccine, smallpox killed 300 million people in the 20th century. After the vaccine, the disease was erased. In 2000, the WHO declared the measles eliminated in the U.S. But several years later, we are seeing some of the highest number of cases in nearly 30 years.

The reason for the resurgence? More parents are opting to not vaccinate.

“Under-immunization has been associated with elevated risk of vaccine-preventable diseases,” said Ruben Espinoza, MD, a pediatrician and physician lead at Banner Health Clinic in Mesa, AZ. “Beyond just the individual risk, nonmedical immunization exemptions or when people opt to not vaccinate for personal reasons, have been associated with an increased community risk of measles and pertussis outbreaks. This type of exemption has increased over the last decade, and that is the reason for all of the outbreaks in the last 5 to 10 years.”

Despite sharing the importance about herd immunity and proving time and again that vaccines don’t cause autism or contain harmful chemicals or “poison,” a small percentage of people (your friend included) just don’t agree. These concerns lead to a decline in immunizations and an increase in vaccine-preventable diseases, such as measles.

“Vaccine ingredients can sound scary to the general public, especially when they are poorly understood,” Dr. Espinoza said. “This has caused some understandable—albeit unfounded—concerns regarding the safety of the ingredients. For example, formaldehyde and aluminum, which serve to stabilize the vaccine or enhance the immune response, are found naturally in our bodies, in our food or environment. The dosage given is miniscule—much less than what is found naturally.”

Do You Approach the Elephant in the Room?

Talking about vaccinations can be really difficult as it touches on deep-rooted belief systems and values. If the WHO, CDC and the majority of health care professionals haven’t persuaded your friend that vaccines are safe and crucial to health—do you really think you could be that one person to change their minds?

If you find yourself on the verge of a very uncomfortable situation with a vaccine-hesitant friend, do you jump in feet first or leave the elephant quietly sitting in the room (socially distanced, of course)? If you think your friend may be open to discussion, there are a few ways to delicately navigate this topic without losing your friend in the process.

Five Ways to Navigate Vaccine Conversations with a Friend

Listening is a crucial skill for young children to learn. It’s one of the building blocks of language and communication, yet it is a skill that many adults still have a difficult time grasping.

Just like we would tell our child to ‘catch a bubble in their mouths,’ resist the urge to speak before you listen. By listening, you can gain a better understanding of their beliefs, assumptions and the facts they are connecting with.

“What often happens in conflict is that someone starts to share, and the other person feels this need to interrupt and prove they are right,” Dr. Fox said. “Remaining passive isn’t giving in, it is enabling you to have a richer and deeper understanding of the other person’s point of view and beliefs."

Paying attention to your tone, attitude and reactions can help make it easier for you to seek understanding. If you allow your temper to flare, you inevitably unload your feelings on that person.

We often naturally mirror, or unconsciously imitate, the behavior and gestures of the person we are speaking with. If they get heated, before you know it, you’re heated and now you both are yelling at each other. Only you can control what’s happening inside of you—calming that fight or flight bell that is about to go off.

“I realize this is easier said than done,” Dr. Fox said. “Just remember, remaining calm and silent doesn’t mean you agree with them. It just means that when it comes to negotiating or persuading others, you must first seek understanding. And to do that, one must remain calm, putting aside their differing views.”

As a fellow parent, you should know that shaming rarely is successful with children, so why would it be different for adults?

In your head, you may want to scream, “How can you not see the facts? Are you stupid?” But ask yourself, “Would this be helpful or hurtful?"

No one wants to be belittled or told they are wrong. It’s a negative act that only has negative consequences. In fact, it will cause a strong irritant in the discussion and will likely end without a resolution.

A surefire way to make the conversation dive bomb south is trying to “win” the conversation with facts. Vaccinations can be a heated topic, and no one wants to be told their beliefs or decisions, parenting or otherwise, are wrong.

Our cultural cognition keeps us anchored to the world and cements us to those groups we identify with and against those who disagree. Changing these pre-existing beliefs and convictions is like pushing a molasses covered rock uphill. You’ll be hard-pressed to change anyone’s opinions about vaccinations overnight—no matter how many statistics and facts you throw at them.

“If you Google something, you are going to find a lot of info—some factual, some not and some seemingly factual,” Dr. Fox said. “Most people want to find the information themselves and don’t want it shoved in front of them.”

If you are going to give them factual information, give it as information—and information only. You can’t guide their change in decision. Ultimately, that’s something they have to come to on their own.

5. Be Patient and Kind

We know seatbelts save lives—not only for those who wear them but also for the passengers in the car—yet some people still don’t wear one. We know smoking is bad for us, and it’s bad for those who get it second hand—yet so many still do it.

Just like with seatbelt wearing and smoking, change is hard, even with the facts presented before you. Be patient. Be kind.

To help ensure you and your family are up to date on all recommended vaccinations, both childhood and adult, visit the CDC website and bannerhealth.com.

Learn more about the importance of vaccinations:
Get These Vaccinations Before Cuddling a Newborn
What to Expect at Your Child’s Well-Check
Immunization for HPV Especially Important for Young Children

Updated: The content of this blog was updated on Tuesday, February 2, 2021.