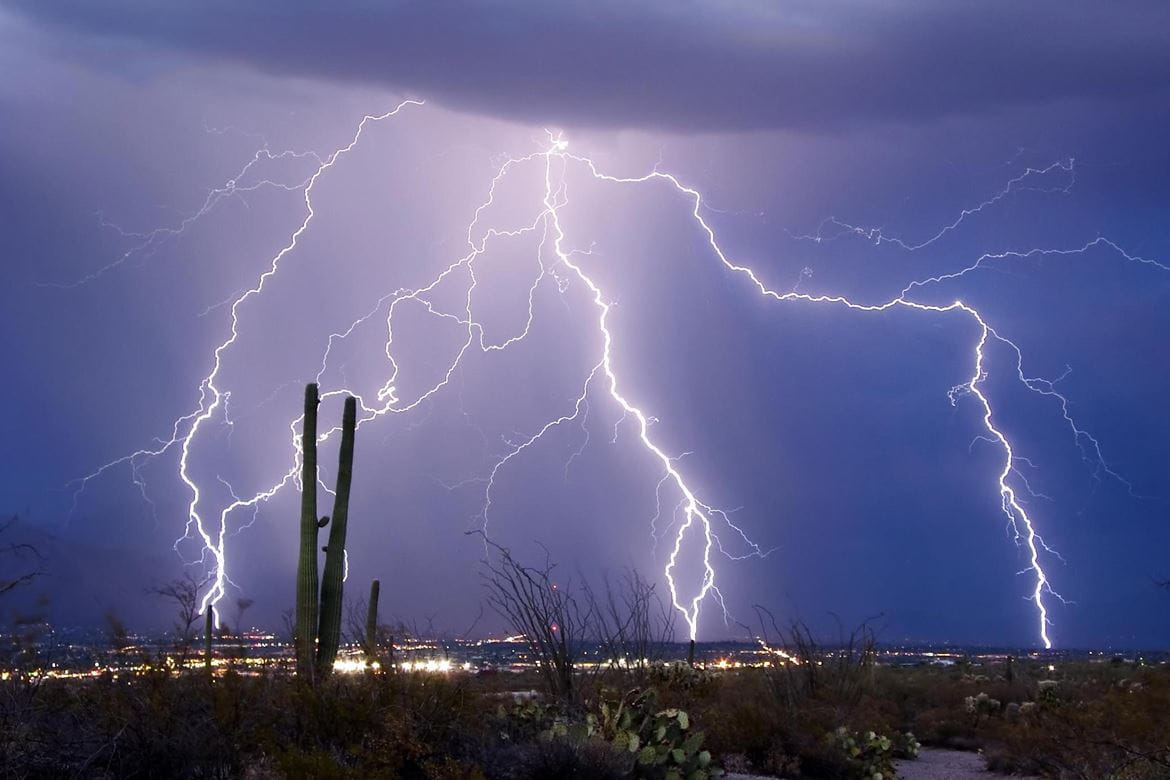 When summer thunderstorms roll in, it’s wise to protect yourself from lightning strikes. In 2021, there were more than 194 million lightning events in the U.S. And Arizona, Nevada and Utah all recorded above-average lightning activity that year. Being struck by lightning is rare but dangerous, and it’s often easy to take steps to be safe.

Here’s what happens if you’re struck by lightning

You might think that lightning strikes are always deadly, but 90% of people survive. A lightning strike is hotter than the sun's surface, but it contacts you for less than a fraction of a second.

“Most commonly, a localized burn will occur,” said Frank LoVecchio, DO, a toxicologist at Banner - University Medicine Family Medicine Clinic. Most of the time, people have minor or momentary pain. Some people have short- and long-term effects such as cardiac arrest, confusion, seizures, dizziness, muscle aches, headaches or memory deficits.

A lightning strike could cause cataracts in the eyes and may also burst an eardrum, which can cause life-long hearing problems.

When people die from lightning strikes, it’s usually because their heart stops or they stop breathing at the time of the strike. “The electrical activity can cause cardiac arrest or an irregular heartbeat. It delivers energy to the heart similar to the way a defibrillator does,” Dr. LoVecchio said. If you see someone get struck by lightning, call 911 and start CPR if necessary and you know how to perform it.

“As the saying goes, ‘When thunder roars, go indoors,’” Dr. LoVecchio said. It’s the lightning that causes the thunder. It heats air to more than 50,000 degrees Fahrenheit in a fraction of a second. The air has no time to expand, so it causes a shock wave for about 10 yards, then becomes a sound wave that you hear as thunder.

For lightning safety, seek shelter and stay indoors until 30 minutes after hearing the last clap of thunder. If you see lightning and can’t count to 30 before you hear thunder, get inside immediately. If you can hear thunder, you are likely within range of lightning. According to the National Weather Service, lightning cay often travel 10 to 12 miles from a thunderstorm. In some instances, it may travel even further. The longest recorded lightning bolt, 477 miles long, traveled across Mississippi, Louisiana and Texas in 2020.

Even when you’re indoors, to stay safer, you should avoid:

If you can’t reach safe shelters indoors, you should:

Lightning strikes are dangerous, but you can reduce your chances of being struck by moving indoors or seeking safer locations outdoors at the first sign of thunder and lightning. If you see someone struck by lightning, you should call 911.

YOU MAY ALSO LIKE
Dating Violence: How to Protect Yourself or Your Teen
6 Exercise Tips to Keep You Moving in Cold Weather
What is Tianeptine (AKA Gas Station Heroin)?
These Tips Can Help You Get Used to Your Hearing Aid
An EpiPen Could Save Someone’s Life: Here’s When and How to Use One
6 Conditions That Affect Men More Than Women
Featured
Advise Me
How Often Should You Wash Your Sheets to Keep Germs Away?
Better Me
Why Is My Nose Burning?
Inspire Me
Three Women, Three Final Treatments, Three Survivors
RECENT
Better Me
Wiggles? Growing Pains? Your Child May Have Restless Leg Syndrome
Advise Me
Why the Type of Protein You Eat Makes a Difference in Your Health
Advise Me
How to Manage Your Own Risk When There’s Cancer in Your Family
Comments 0