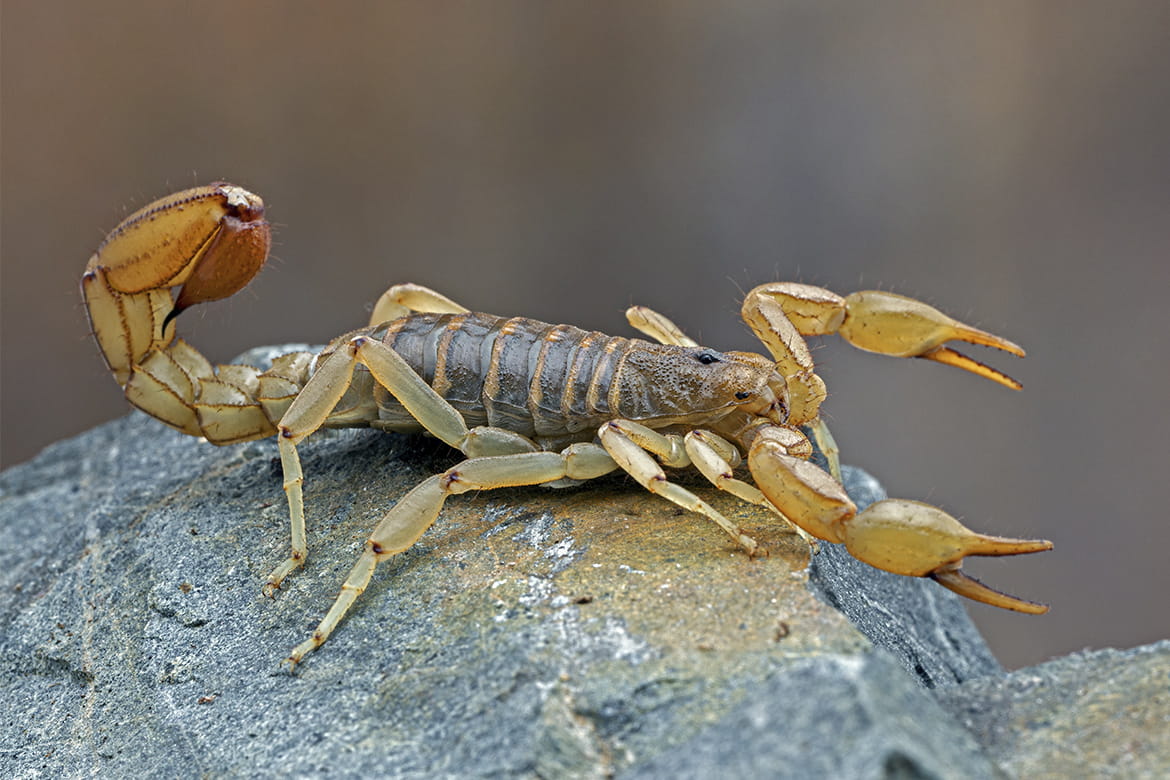 They’re creepy and they’re crawly, and one may be hiding in your shoe! If you live in the desert or a semi-dry climate, you’ve probably encountered a scorpion or two in your yard or house—and possibly even stepped on one. Ouch!

While scorpions actually are pretty amazing and beneficial creatures, many of us fear them because they can sting. Much of this fear stems from the myths that are out there about them. It may be hard to separate fact from fiction.

Myth #1: A scorpion sting is fatal.

Between 40 to 50 different species of scorpions live across Arizona. Only the Arizona bark scorpion (Centruroides sculpuratus) can produce severe toxic symptoms to your nervous system – though most people stung by one can be safely managed and observed at home.

The age of the scorpion doesn’t dictate if the venom is more dangerous than the venom of an adult scorpion. Venom from all scorpions, regardless of size, is still venom.

A bark scorpion, in general, is smaller in size than other species of scorpions so perhaps this is where this myth comes from. That said, baby bark scorpions aren’t potentially more venomous or dangerous than their older siblings or parents.

Unlike a bee sting, scorpion stings often do not leave a mark. Given the small size of the bark scorpion, it’s often difficult to find the puncture wound. It’s not surprising that even when a patient comes into the urgent care or emergency department that the staff are also unable to determine the location of the puncture wound.

Myth #4: Applying an ice pack is the best way to alleviate symptoms.

While an ice pack may seem like it will be useful in reducing the numbness and pain caused by a scorpion sting, symptoms can come back with greater intensity when the ice pack is removed.

Instead, use a cool compress applied to the sting site. To do this, get a bowl of water with some ice cubes and soak a few washcloths to use as damp, cool compresses. Place one of the washcloths on the sting site and rotate out with a fresh one as needed. This way you’ll provide the same level of relief without causing any rebound symptoms or potential frostbite to the skin.

Myth #5: Antihistamines are useful after a scorpion sting.

All scorpions are indeed venomous, though their venom varies greatly in potency. This means that if you’re stung by a scorpion other than the bark scorpion, the symptoms will likely only include localized pain and discomfort that should resolve within an hour or two.

Fact #2: Scorpions glow in the dark.

Scorpions contain a hyaline layer in their exoskeleton that reflects certain wavelengths of the ultraviolet (UV) light spectrum. Though not completely understood why, it’s believed this allows the scorpions to either “see” their surroundings or perhaps attract their insect prey. Even fossils of ancient scorpions are still fluorescent under UV lights. Pretty cool!

Fact #3: Severe bark scorpion stings can be treated with antivenom.

There is an approved antivenom for severe bark scorpion-related symptoms, although most adults who seek treatment for scorpion stings don’t meet the indication threshold. Most adults can be treated with strong pain relievers and sedatives to help tolerate symptoms when they’re at their most intense—roughly the first six hours.

The antivenom is generally reserved for severe symptoms in the pediatric population. It is very effective in reversing these symptoms, and children can generally be discharged to home after antivenom administration.

For most patients, the majority of symptoms will be clear within the first six hours. After six hours, it’s unusual to see any new or worse symptoms. It can take up to 48 to 72 hours for those symptoms to significantly resolve, though in very rare instances, some patients report persistent symptoms for weeks to months afterward.

Patients often describe a burning pain at the presumed sting site. The venom attacks the nerve endings causing them to fire improperly, which can cause numbness and tingling around the site. The venom doesn’t travel in the bloodstream though, so it doesn’t affect your brain, heart or lungs. As the symptoms worsen, patients will describe muscle twitching or spasms, sometimes involving the tongue, and altered taste sensation or even a lump in their throat when swallowing.

Kids can have it the worst though. They can have severe muscle spasms and cramps and increased salivation to the extent that it becomes a choking hazard in the very young. Fortunately, in all these scenarios, there are different treatment strategies offered in an urgent care or emergency department that can address all these more serious cases of a scorpion sting.

In general, it’s good to remember that scorpions aren’t out to get you. They are really harmless unless provoked, so it’s important to follow these precautions:

Here are other helpful tips to fight off scorpions and other critters.

In the rare chance a scorpion stings you and you begin to experience severe symptoms and/or an allergic reaction, please visit your nearest urgent care or emergency department or call the Poison Control at 800-222-1222 (available 24 hours a day).

To find a Banner Health location near you, visit bannerhealth.com.

For additional information on scorpions, snakes and other creepy critters, check out these related articles:

YOU MAY ALSO LIKE
Does Your Child Need Medical Care or Can You Treat Them at Home?
These Tips Can Help You Get Used to Your Hearing Aid
An EpiPen Could Save Someone’s Life: Here’s When and How to Use One
Parent’s Guide for Taking Newborn Temperatures
6 Conditions That Affect Men More Than Women
Scoop on Poop: 5 Things to Know About Your Poop
Featured
Advise Me
How Often Should You Wash Your Sheets to Keep Germs Away?
Better Me
Why Is My Nose Burning?
Inspire Me
Three Women, Three Final Treatments, Three Survivors
RECENT
Teach Me
Are You at Risk for Infection with the Epstein-Barr Virus?
Teach Me
What Parents Should Know About the Germs That Cause Scarlet Fever
Advise Me
How to Grieve Someone Who Was a Negative Part of Your Life
Comments 0