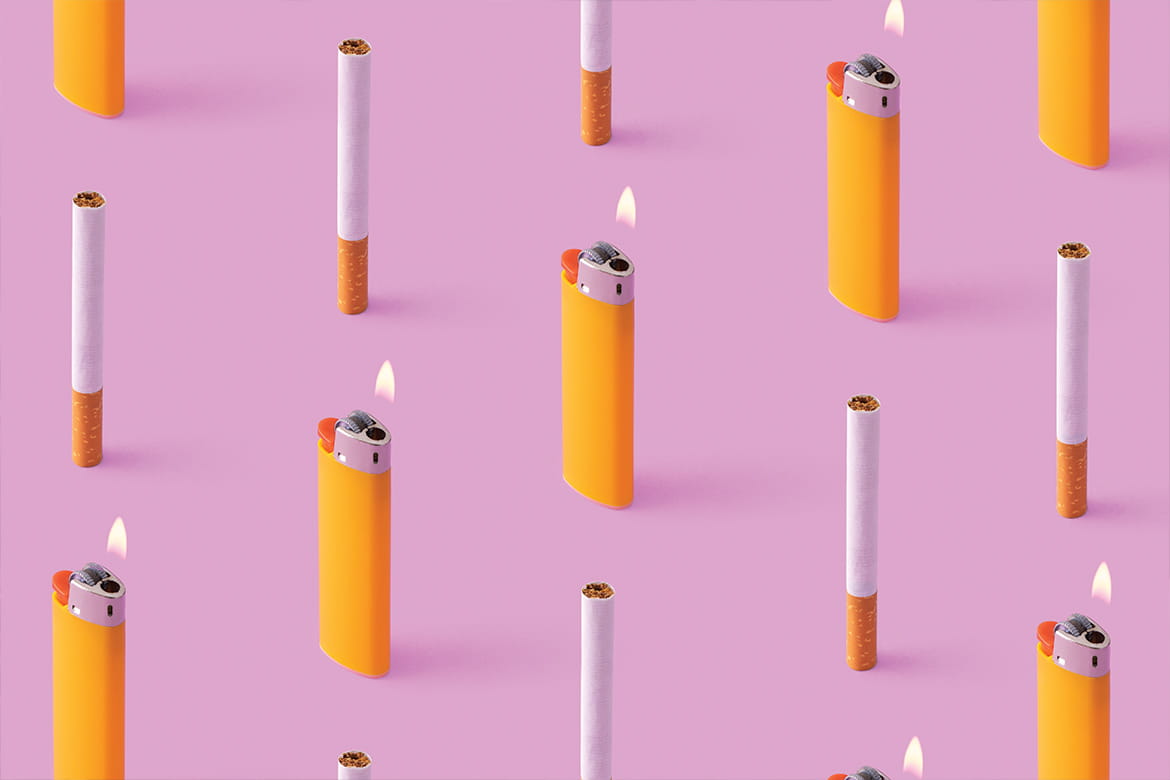 It’s usually easy to tell whether someone has recently smoked in a room or not. That stale odor always seems to “stick” around. Even when a smoker moves out of a home, the carpeting may still smell like smoke and the walls and ceilings may have a yellowish hue.

But did you know that this lingering scent and the residue left behind can harm your body just as much as smoking and secondhand smoke? It’s called thirdhand smoke.

Although you may not touch nicotine, you and your children could potentially be at risk for thirdhand smoke. Read on to learn more about what is thirdhand smoke, the dangers it can pose to your health and how to reduce your risk.

What is thirdhand smoke?

After a smoker takes a puff of their cigarette, smoke is released into the air. For a moment, you’ll see a visible haze of smoke, but eventually it disappears. When you don’t see smoke, it’s easy to think it’s gone, but research shows that smoke isn’t gone at all.

Thirdhand smoke is residue from tobacco smoke that adheres – or sticks – to walls, furniture, clothes, skin and other surfaces after someone has smoked in an area. After the smoke clears, thirdhand smoke is there to stay.

“Exposure to thirdhand smoke can happen through absorption on the skin, ingestion and inhalation,” said Billie Bixby, MD, a pulmonary medicine specialist at Banner – University Medical Center Tucson. “It can lead to exposure by touching contaminated surfaces or breathing in the aerosols created by the vapor or dust contaminated by the smoke.”

While medical experts continue to learn more everyday about its long-term effects, research has shown that thirdhand smoke causes damage to people’s DNA, increasing their risk of developing certain cancers, such as lung cancer, and other chronic diseases like asthma.

“The consequences of long-term exposure may be comparable to the risks associated with secondhand smoke exposure,” Dr. Bixby noted.

Results of a study published in 2021 found that nicotine from thirdhand smoke reacts with the ozone, nitrous acid and formaldehyde to generate carcinogens, which are compounds that can cause cancer.

Other animal studies and studies of human cells have shown that being exposed to thirdhand smoke causes DNA damage and a reduction in DNA repair. The toxic chemicals in thirdhand smoke disrupts multiple steps in cell reproduction, causing issues with new cells. “The potential effect of this is broad, ranging from impaired sleep from decreased melatonin, impaired wound healing, infertility and cancer,” Dr. Bixby said.

You might imagine that adults are most at risk for secondhand and thirdhand smoke, but children are the most vulnerable because of their exposure to surfaces and clothing.

“Children living in homes with smokers are at the highest risk since they may crawl on the floor, touch their parents’ clothing or hair and other household objects and surfaces,” Dr. Bixby said.

Adults who don’t smoke but live with those who do are also at much higher risk for thirdhand smoke exposure.

Reduce your risk of thirdhand smoke

Thirdhand smoke residue builds up over time on most surfaces it touches. It can stick around for weeks, months or years. The best way to reduce your risk is to be in a smoke-free environment and to avoid places where smoking occurs.

Here are some additional tips that can lower the risk:

While these tips don’t and can’t remove all the potential problems associated with thirdhand smoke, it can reduce smoke residue and off-gassing of tobacco toxins in your own home.

If you have concerns about your exposure to secondhand or thirdhand smoke and the related health risks, talk with your health care provider.

For additional resources, check out:

YOU MAY ALSO LIKE
These Tips Can Help You Get Used to Your Hearing Aid
6 Conditions That Affect Men More Than Women
Scoop on Poop: 5 Things to Know About Your Poop
These Core Exercises for Seniors Can Help Prevent Injuries
9 Natural Remedies For Tummy Aches
11 Heart Health Beliefs That Are No Longer True
Featured
Advise Me
How Often Should You Wash Your Sheets to Keep Germs Away?
Inspire Me
Three Women, Three Final Treatments, Three Survivors
Teach Me
5 Tips to Remove Water From Your Ears
RECENT
Teach Me
What is Tianeptine (AKA Gas Station Heroin)?
Better Me
How to Get Rid of Those Painful Cracks in the Corners of Your Mouth
Teach Me
Why Do I Keep Getting Strep Throat?
Comments 0