Vaping Vs. Smoking: Why One Isn’t Better Than the Other 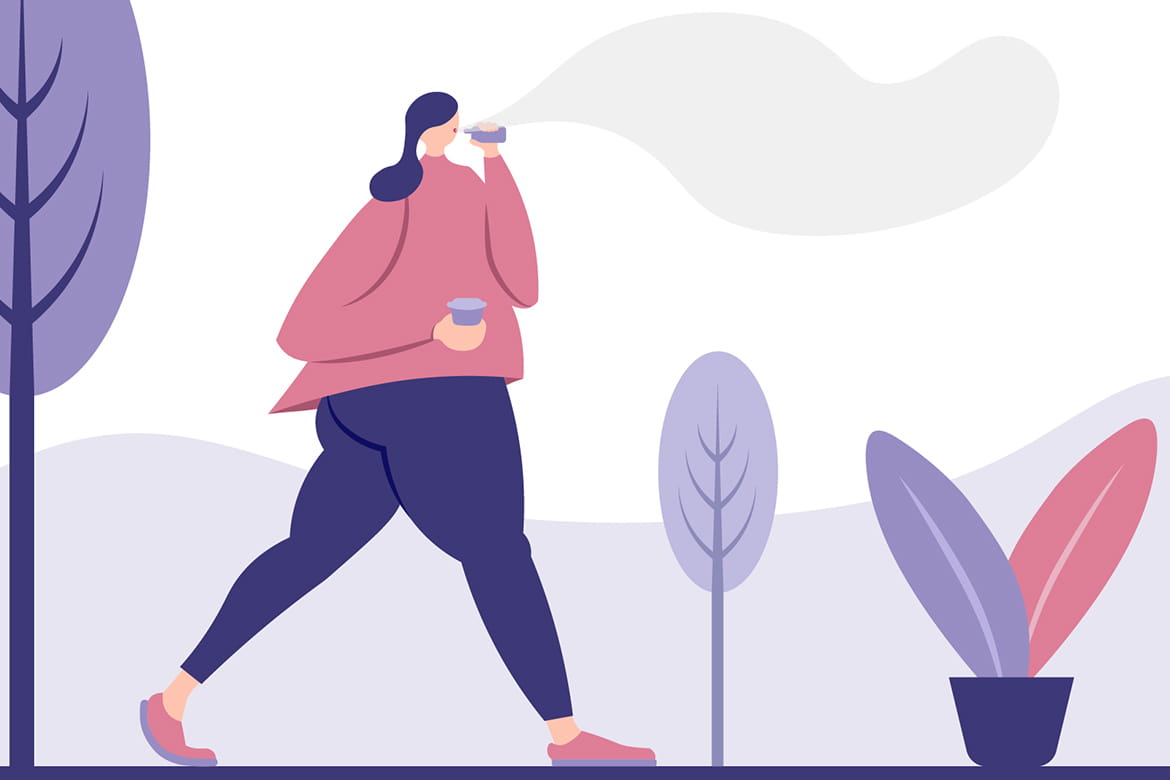 If you’re trying to kick your smoking habit, you may have considered taking up vaping, or e-cigarettes, to ease your transition from tobacco cigarettes.

More than a decade ago, vaping exploded in popularity as a “healthier” alternative to regular tobacco products, but current research is shining a grim light through this smoky haze.

With the help of Michel Corban, MD, an interventional cardiologist at Banner Health in Tucson, AZ, we break down four major risks associated with vaping and why you should avoid it.

Risk one: E-cigarettes don’t make it easier to quit smoking

You may notice e-cigarette brands touting their products as tools to quit smoking, but these claims aren’t recognized by the U.S. Food and Drug Administration (FDA). As such, e-cigarettes aren’t approved as smoking cessation aids.

In addition, current research is showing that e-cigarettes may actually promote addiction to vaping—encouraging you to replace one vice with another or to use both.

“While a recent review found that nicotine e-cigarettes were more effective than nicotine replacement therapies and behavioral support in helping tobacco smokers quit smoking, many smokers who used vaping as a smoking cessation aid ended up using both,” Dr. Corban said.

One chemical, in particular, making headlines is vitamin E acetate, a thickening agent often used in THC vaping products. The Centers for Disease Control and Prevention (CDC) has identified vitamin E as a chemical of concern after an outbreak of lung injuries and deaths associated with vaping.

We’ve long known that tobacco smoking contributes to heart and lung problems. Recent studies have found that e-cigarettes do as well.

“Both nicotine and non-nicotine toxins in tobacco cigarettes and e-cigarettes are harmful to the cardiovascular system,” Dr. Corban said. “Nicotine increases your heart rate and blood pressure. It can also constrict blood vessels leading to decreased blood supply to organs throughout your body, resulting in an increased risk for heart attacks, strokes and abnormal – sometimes fatal – heart rhythms, such as atrial fibrillation and ventricular fibrillation.”

In addition, non-nicotine toxins in e-cigarette vapor can damage the endothelium, a thin membrane that lines all the blood vessels. “When this occurs, it can put you at greater risk for developing atherosclerosis, sometimes called hardening of the arteries, and heart attacks,” Dr. Corban said.

When it comes to your lungs, e-cigarette smoking, similar to tobacco smoking, has been recently shown to increase risk of asthma and chronic obstructive pulmonary disease.

Risk four: A growing number of our youth are hooked

E-cigarettes are so popular, sadly even young adults are vaping too.

“A growing number of teenagers and young adults, many of whom were never-smokers, have started vaping,” Dr. Corban said. “In fact, 30% of high school seniors reported vaping in the past 30 days.”

It’s unclear why e-cigarettes have become so popular among young adults, but it has raised concerns about the long-term health risks associated with e-cigarettes and their potential to act as a gateway to tobacco cigarettes.

“The fact that almost one-quarter of e-cigarette users are previous non-smokers indicates that other factors, other than nicotine addiction, may be involved in the expanding use by youth,” Dr. Corban said. “Such factors could be a false widespread belief that vaping is less harmful than tobacco smoking and can potentially encourage recreational use among teens and young adults.”

Do you really want to quit smoking?

If you’re toying with e-cigarettes as a means to quit smoking, seek professional help instead. And if you’ve already started vaping, work with your health care provider to find a smoking cessation treatment that works for you.

“Quitting all forms of cigarette smoking is of the utmost importance to curb and/or reverse the detrimental health effects and to decrease the risk of major adverse cardiovascular events including heart attacks, serious lung problems, depression and anxiety in not only our adult patients but also in our youth,” Dr. Corban said.

YOU MAY ALSO LIKE
These Tips Can Help You Get Used to Your Hearing Aid
6 Conditions That Affect Men More Than Women
Scoop on Poop: 5 Things to Know About Your Poop
These Core Exercises for Seniors Can Help Prevent Injuries
9 Natural Remedies For Tummy Aches
11 Heart Health Beliefs That Are No Longer True
Featured
Advise Me
How Often Should You Wash Your Sheets to Keep Germs Away?
Better Me
Why Is My Nose Burning?
Inspire Me
Three Women, Three Final Treatments, Three Survivors
RECENT
Teach Me
Why Do I Keep Getting Strep Throat?
Teach Me
Are You at Risk for Infection with the Epstein-Barr Virus?
Teach Me
What Parents Should Know About the Germs That Cause Scarlet Fever
Comments 4